There are nights at the theater where the stars align to deliver an experience that exceeds all expectations. Friday night premiere Kunstkamer by The Australian Ballet was one of them. To say it was perfect is to do him an injustice. The ability to encapsulate the entire history and DNA of an art form in a single performance requires genius – not only from its creators, but also from those who execute their vision. The Australian Ballet and the musicians of the Opera Australia Orchestra under the direction of Nicolette Fraillon have had it in spades.

Kunstkamer can be loosely translated as “cabinet of curiosities”. It is derived from the homonymous tome compiled by the collector Albertus Seba between 1734 and 1763, as well as from the museum of Peter the Great in Saint Petersburg, to which Seba contributed. The idea of ​​using it as the thematic backbone for a Nederlands Dans Theater (NDT) 60th anniversary celebration in 2019 might never have happened if choreographer Sol León hadn’t donated Seba’s book. to then-artistic director Paul Lightfoot as an opening night gift several years earlier. A program note points out that Seba’s approach was too scientific for León, who was also drawn to the more witty work of German entomologist and science illustrator Maria Sybilla Merian. León and Lightfoot invited fellow choreographers Crystal Pite and Marco Goecke to join them, and the result is a work that not only transcends art and science, but also explodes with creative force that is both groundbreaking and commemorative.

It opens with an animated sequence of male and female characters, who explore the limits of human form before melting into an amorphous mass of energy, a camera lens, and finally a white rhinoceros. A longtime symbol of sure footing, it’s the perfect spirit animal for a dance troupe. Or perhaps it recalls Albrecht Dürer’s 1515 woodcut of the animal, which was based entirely on hearsay and serves as the perfect metaphor for how a choreographer’s legacy is transmitted and reinterpreted from one generation to another. Crystal Pite calls it “the ultimate exchange”, while Hans von Manen once told Lightfoot, “You imitate first, then you expand”. This is precisely what happens in Kunstkamer. 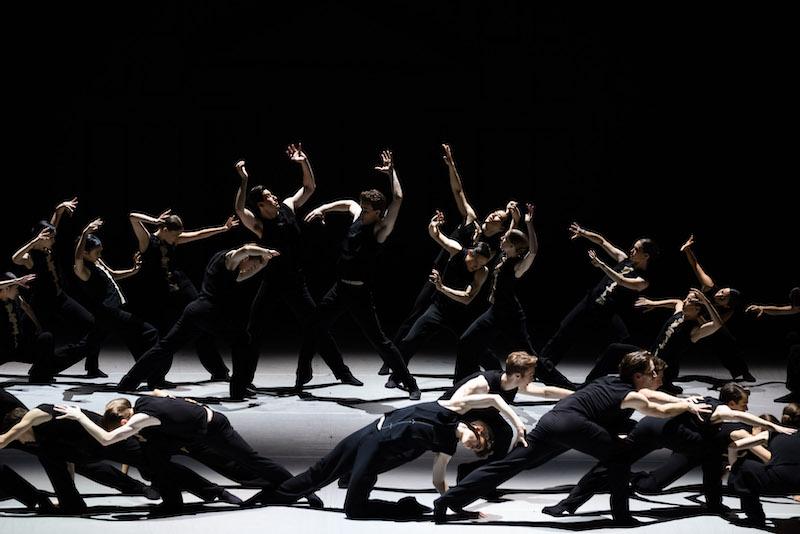 What unfolds in León and Lightfoot’s Regency-style Black Gallery is a redefinition of what dance can be, while offering a reverential nod to the past. This is not a review, which could have been another way to celebrate NDT’s rich history. That said, it’s hard to imagine making a selection of the company’s greatest hits. Instead, Kunstkamer is an unpublished work enriched with the CND repertoire, as well as the entire history of art.

Iconic poses of Nijinsky can be discerned from time to time, whether on the ground or captured halfway up. There is a hunting circle, which could be a direct reference to Maurice Béjart’s 1959 Rite of Spring or Medhi Walerski Room, which he created for NDT in 2012 and pays homage to the work of Béjart. One of the many sight gags is León’s use of the slowly rising and falling front curtain at the start of Part II of Kunstkamer. This is perhaps a slow-motion homage to William Forsythe’s judicious use of the curtain in his seminal 1984 work. Artifact; or perhaps it provides a self-referential counterpoint to the passage between León and Lightfoot Sehnsucht and Schmetterling from 2010, where the stagehands were revealed by a curtain rising behind the dancer. It’s up to the public to decide.

There is no denying the influence of Jiří Kylián Black and white ballets. From their pronounced breathing, powdered faces and gaping expressions, to guttural lyrics and dancers throwing themselves against the wall, a clear line can be drawn in the León-Lightfoot repertoire. The recurring use of clownish masks in many of their works, including the mambo-infused one Unfortunate case from 1998, are recalled by the pale presence of Adam Elmes in Kunstkamer. Half harlequin, half Bip by Marcel Marceau, Elmes embodies one of the two muse entities that reappear throughout the evening. The other is danced by Bénédicte Bemet, resplendent in her fitted red jacket and black puff tutu. Bemet and Elmes look stunning as they weave around the stage and accompany artistic director David Hallberg to open the doors to this giant Advent calendar. 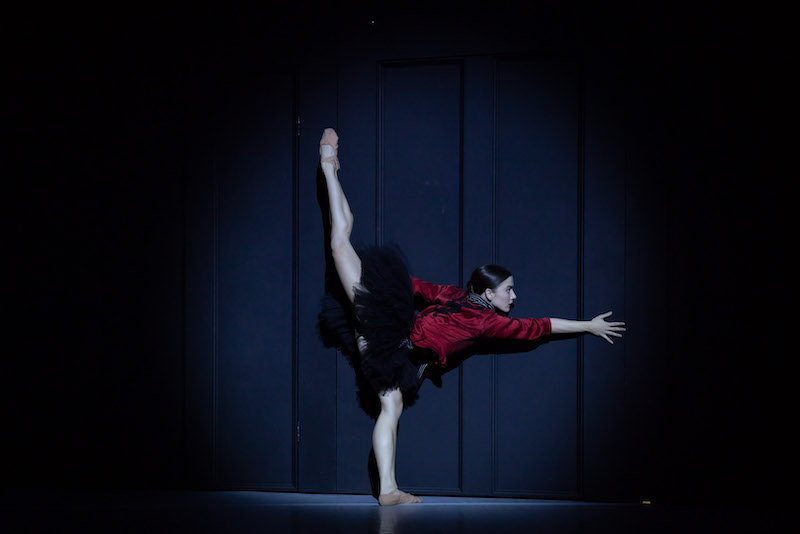 Hallberg gives a totemic performance as curator of the Kunstkamer, which reveals choreographic gems and allows them to intersect. He could be all the choreographers in one, filled with all their neuroses and their genius. The composite entity he creates is the linchpin of this world. Sometimes grotesque, sometimes cheeky and hilarious, Hallberg seems to personify the creative spirit in a compelling portrayal that elevates dance makers to mythical status. They are worthy of reverence, inspire admiration and only occasionally deserve to be laughed at…albeit with love.

Hallberg last performed in Sydney alongside Natalia Osipova in 2019. Kunstkamer offers a rare opportunity for Sydney audiences to marvel at her artistry and dancing prowess. It’s an incredibly demanding tour de force and Hallberg will share the role with guest artist, Jorge Nozal, for whom it was originally created at NDT.

Other star dancers at the Friday night premiere were Brett Chynoweth, Amy Harris, Callum Linane and Lucien Xu. All were uniformly outstanding in a series of intricately choreographed solos and pas de deux that juxtaposed manic port de bras with the longer lines of neoclassical ballet in new dance vocabularies created by León, Lightfoot, Goecke and Pite.

Initially dressed by Joke Visser and Hermien Hollander in flesh-colored tops with butterfly designs (no doubt referencing the illustrations in Seba and Merian’s books), the dancers later changed into more visceral costumes suggesting the loss of skin or from a cocoon. Their short moves were perfectly intertwined with impressive group scenes that culminated in a glorious finale on Purcell’s king arthur.

The evening’s music also included works by Ólafur Arnalds, Bartók, Beethoven, Arvo Pärt, Rodgers & Hart, José Sandoval, Schubert, Joby Talbot and Janis Joplin. Although Lightfoot did much of the selection himself, his fellow choreographers had a say in what music they would choreograph to. Pite had already worked with Schubert’s Piano Sonata No. 21 in B flat major and wanted to revisit the piece. Goecke was entrusted with works by Johan Strauss Jr., but he was allowed to incorporate a recording by Janis Joplin to great effect in the first part. It is curious that the public is still surprised by the use of contemporary music in ballet. Many years have passed since 1963 by Peter Darrell Mods and rockers with the music of the Beatles or Twyla Tharp’s 1973 Deuce Coupe for Joffrey Ballet on songs by the Beach Boys. Alvin Ailey also used music by Janis Joplin in his 1971 ballet flowers. 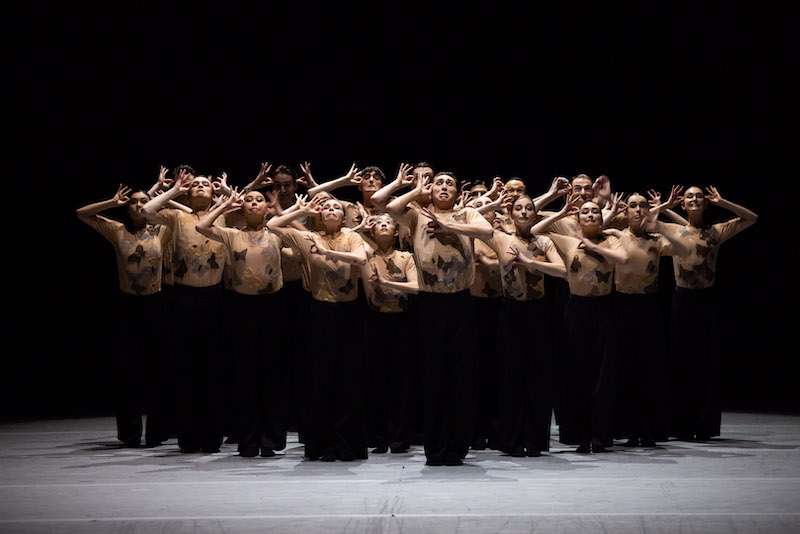 Much more surprising was the singing ability of the Australian Ballet dancers. Lightfoot strongly believes in the power of community singing. He grew up on a farm in northern England, where he and his father sang with male backing vocals. In discussing his decision to include a choir in Kunstkamer, he told Hallberg that doing something different would be good for the piece and the process would bring the dancers together. The result was a stunning and incredibly breathless vocal performance that kept the audience spellbound.

When the Nederlands Dans Theater first presented Kunstkamer in 2019, a photograph of his original 1959 company was projected behind the dancers seated on stage in the final tableau. The picture featured Sonia Gaskell, who had led the group in their breakaway from Dutch Ballet, alongside Han Ebbelaar, Rudi van Dantzig, Gérard Lemaître, Alexandra Radius and Hans van Manen. On Friday night, a 1965 photo of the Australian Ballet was used instead, featuring company founder Peggy Van Praagh and dancers such as Marilyn Jones, Colin Peasley and Garth Welch, among others. In that moment, audiences came face to face with the legends who put our national company on the map and today’s rising legends who are shaping the future of dance for generations to come. .

As the dancers gathered for their curtain call, they were illuminated in a checkerboard formation. This feature of Kylian and León-Lightfoot’s repertoire added a poignant touch to the course of the evening, as it had also been used to spectacular effect in the finale of Be ready – Lightfoot’s last job as Art Director of NDT in 2020.

Kunstkamer is a masterpiece, developed by the best for the best. The Nederlands Dans Theater has just celebrated its 60th anniversary, while the Australian Ballet is about to celebrate its own. Both companies share a heritage filled with artist residencies and choreographic collaborations that have seen them become the powerhouses they are today. Friday night’s performance was a triumph for both and cements Hallberg’s position as artistic director of one of the best ballet companies in the world. It’s hard to hold back when you rave about their latest achievement. Suffice it to say, one viewing is definitely not enough.

The Australian Ballet performs Kunstkamer at the Joan Sutherland Theatre, Sydney Opera House until May 14, then at the Arts Center Melbourne from June 3-11, with a live broadcast on June 10. More information.

The Ballet Performance Market report describes the various factors influencing the dynamics of this field such as growth drivers, challenges, opportunities, and associated risks during the forecast period 2022-2028. According to the conclusive expert view, the market is poised to expand at XX% CAGR during the forecasted period. These estimates are further supported by statistical […]

The Global dance-ballet performance market from 2022 to 2028 search by MarketQuest.biz contains information on the structure and size of the market. According to the research, important categories are expected to grow rapidly between 2022 and 2028. It examines the market in terms of segments, geographies, manufacturers, revenue share and sales in key countries. The […]

JCMR has recently released a new study in its database which highlights the in-depth analysis of the market with the future prospects of Ballet performance market. The study covers important data that makes the research document a handy resource for managers, industry executives and other key people who get a ready-to-access, self-analyzed study and charts […]