(HOLMDEL, NJ) — Axelrod Contemporary Ballet Theater (AXCBT) presents “Dancing in the Dark”, an immersive dance-theatre performance celebrating the “world beyond”. AXCBT invites theatergoers and Halloween fans to a spellbinding dance party, inspired by popular horror classics. Each performance will include dance theater pieces inspired by “Frankenstein” by Mary Shelley, “Dracula” by Bram Stoker, “The Birds” by Alfred Hitchcock and a new version of the ballet “Giselle”. Performances will take place at the Bell Works Theater on October 30, 2021 at 2:00 p.m. and 7:00 p.m. and October 31, 2021 at 2:00 p.m. and 5:00 p.m.

“I wanted to celebrate Halloween from a different perspective,” said AXCBT artistic director Gabriel Chajnik. “What is bound to this world is darkness and the fear that comes with the absence of light. Nighttime is when our monsters come out to play and all our fears come to light.

Directed by Chajnik, “Dancing in the Dark” will be narrated by special guest actor William King. Chajnik and Axelrod Performing Arts Academy (APAA) acting professor Jason Cohen wrote the script for the show.

Chajnik enjoys telling timeless and popular stories, especially from a unique perspective. His “Frankenstein” by Mary Shelley will follow Shelley’s inspiration and creation of the iconic monster, instead of focusing on the monster itself. His “Dracula” will shed light on the novel’s insights into the relationship between religion and reason, East and West, the modern age versus the ancient world, and how love can transcend space and the weather. With video mapping, he will bring Hitchcock’s “Birds” to life, immersing audiences and performers in the urgency to stop taking nature for granted. His “Giselle” will emphasize that despite death and the darkness of the human soul, love above all else can liberate from death.

Advertise with New Jersey Stage for $50-$100 per month, click here for more info

“To witness the admiration of the live performance [of AXCBT last winter] during the pandemic was both haunting and humiliating,” said NJSYO President Lakshmi Nadiminti. “Although we performed in our separate productions, the prospect of a collaboration had already settled in. Over time the powers of being came together and we began this collaborative journey of music and dance together at Bell Works. We are more than happy that our students have this opportunity. 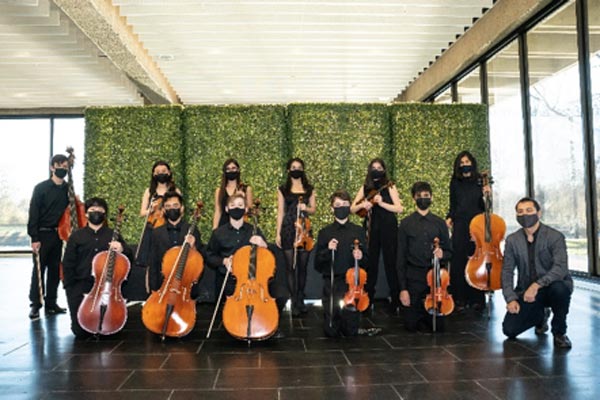 For the show, pre-professional students will play Johann Sebastian Bach’s Toccata and Fugue in D Minor, arranged by Soeda. APAA Elementary students will also perform an Addams Family-inspired number at the event.

Spectators are invited to come in costume! AXCBT will be giving away prizes for the best costumes, including free tickets to “The Nutcracker Rocks.” Chajnik’s original and magical retelling of the family vacation classic. “The Nutcracker Rocks” will be AXCBT’s first performance on stage at the Axelrod Performing Arts Center since 2019.

Bell Works Theater is located at 101 Crawfords Corner Road in Holmdel, New Jersey. All tickets are $35 per person and available for purchase in line. Users can gand $20 off your “Dancing in the Dark” tickets if you buy 2 tickets for “The Nutcracker Rocks! Must call box office for promotion: 732-531-9106. Tickets for “The Nutcracker Rocks” available for purchase in line.

In recent years, diversity and inclusion have become buzzwords in business circles. Companies and organizations hire people, schedule meetings, or create departments to put these terms into practice. But since 1994, a world-renowned dance company has been doing diversity and inclusion in a different way, “reinventing” human movement from the ground up to incorporate a […]

Since 2006, the dancers of Missouri Contemporary Ballet have fused art and athleticism, delivering some of Colombia’s most dynamic performances. Throughout this time, Founder and Director Karen Mareck Grundy has shaped the organization, emotionally combining fundamentals, collaboration and showmanship. This summer, the troupe will both nod to its pioneering work and prepare for the future […]